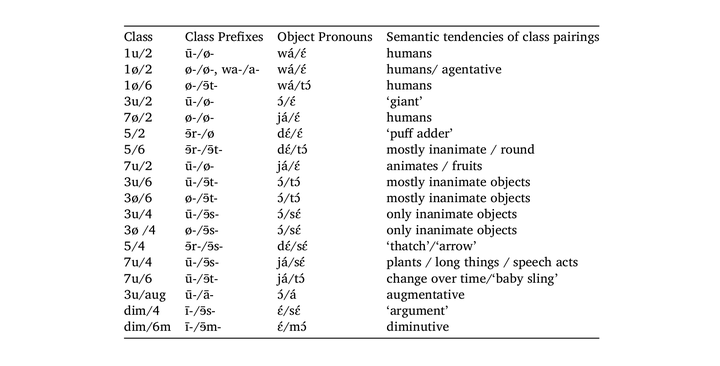 This paper is an overview of the noun class groupings in the Ror variety of u̱t‑Maꞌin, a Benue‑Congo language belonging to the Kainji subgroup. There are thirteen noun classes that form into eighteen singular-plural pairs (Smith 2007). Semantic properties characterize most clearly the singular-plural pairings. For example, most animals, crops and tree fruits occur in pairing 7u/2; pairing 5/6 contains mostly inanimate referents that can be characterized as round. However, the few animate members of pairing 5/6 are also considered round by u̱t‑Maꞌin speakers. Humanness, animacy, shape and size serve as the primary criteria for the assignment of a noun to a particular class or pairing. I present evidence for the semantic cohesion and semantic assignment criteria from the derivational relationships that exist between classes as well as from the distribution of loan words throughout the classes. Each noun class pairing and unpaired class (used for non-count and mass nouns) are discussed for semantic regularities and notable exceptions. I further discuss how verbal nouns are found in five of the thirteen noun classes.

The table presented in the image: