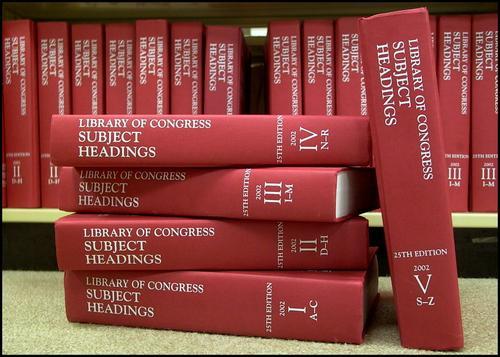 Library of Congress Subject Heading (LCSH) terms are constantly evolving, only usually have 3-6 applied to a single work, are comprised of morphological components (there are classes of terms—roots or stems which are called topics, and then modifiers “morphemes” which are called topical subdivisions). For discussion of the linguistics in the LCSH description language consider (Citation: Daily, 1957) Daily, J. (1957). The Grammar of Subject Headings: A Formulation of Rules for Subject Heading Based on a Syntactical and Morphological Analysis of the Library of Congress List .  Columbia University, Retrieved from https://www.proquest.com/openview/41ed2cde0a8ef9cd9f8bc132b91e82c6/1 , (Citation: Svenonius, 2000) Svenonius, E. (2000). LCSH : Semantics, Syntax and Specificity. Cataloging & Classification Quarterly, 29(1-2). 17–30. https://doi.org/10.1300/J104v29n01_02 , (Citation: Iwe, 2001) Iwe, J. (2001). Linguistics and Information Processing: Provision of Syntactic and Semantic Consistency in the Language of Library of Congress Subject Headings (LCSH) Pertaining to Literature and Librarianship: A Comparative Analysis. Cataloging & Classification Quarterly, 32(2). 107–126. https://doi.org/10.1300/J104v32n02_09 , (Citation: Anderson et al., 2006) Anderson, J. & Hofmann, M. (2006). A Fully Faceted Syntax for Library of Congress Subject Headings. Cataloging & Classification Quarterly, 43(1). 7–38. https://doi.org/10.1300/J104v43n01_03 .

In contrast to LCSH subject terms, the Open Language Archives Community metadata schema, a Dublin Core profile designed to be shared over OAI-PMH has only 29 subject terms. The small number of terms (set size) and their apparent clarity to linguists are some of the great aspects of OLAC, where content creators are often the ones who also are cataloging the materials. Of the 29 OLAC subject terms listed in the OLAC documentation, the documentation indicates that 22 of them are matched to LCSH terms. Generally the OLAC note says: “The category is equivalent to the Library of Congress subject heading of the same name.” However, no specific LCSH term is specified. This creates problems for libraries who might otherwise use their LCSH terms to propagate OLAC terminologies for use in the OLAC aggregator.

Several examples are worth mentioning:

For the OLAC subjects I have looked at already, the following table lists what I hypothesis as being the OLAC intended equivalent. I haven’t worked my way through the whole table yet. When I have worked through the whole set of OLAC terms I will present this data in a more beautiful way. Currently it is in a markdown table and as a JSON file here.